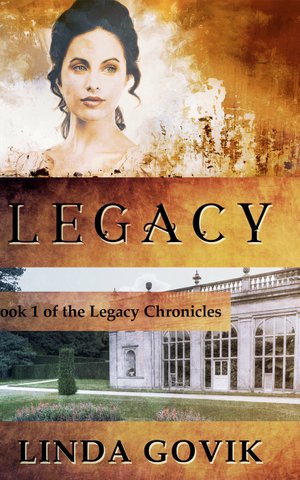 The year is 1806. Emily Bradley has just taken a step toward independence by starting to paint portraits on commission. Unbeknownst to her, her first customer is linked to the man she fears the most—Lord Charles Stanford, who once violated her and left her pregnant. Emily is hurled into a series of events over which she has no control as Lord Charles is made aware of her current whereabouts and returns to her life, intent on using her and their now eight-year-old son to claim his heritage.

Forced into marriage and soon suffering under Lord Charles’ cruel reign, Emily is unable to pursue the life that was once laid out before her feet, and her dream of becoming a painter slips further and further away. But then, Napoleon Bonaparte’s courier, Étienne de Ste Germaine, turns up. The handsome nobleman is sent out on a mission to bring her to France, to paint a portrait of the Empress Joséphine—an offer Emily cannot resist. Blind to the consequences, driven by her need for independence, she defies her husband and sets out on a journey that is fraught with danger but also holds the promise of both freedom and a sweet but forbidden romance.

Knowing the dream will inevitably end one day, Emily must now struggle for the courage to become the person she was meant to be and accept that her quest for liberation comes with a price so high that it might ultimately cost her everything

LEGACY IS THE FIRST BOOK IN A TRILOGY

THE STORY BEHIND LEGACY

Legacy is one of my oldest stories. When I was younger, I used to stay cooped up in my chamber and write ferociously, filling page after page in my notebooks. Mostly, I jotted down opening scenes, which I never completed. Legacy was one of these opening scenes, and in those days, it was written in Swedish (my mother tongue). Some fifteen years later, a couple of non-Swedish speaking friends heard that I was writing, and wanted to read an example. I didn't know what to send them, but for some reason, I picked the opening scene of Legacy. This piqued not only their interest, but also mine. I was intrigued by the young girl who flees in panic from the wealthy man who assaulted her, and wanted to know more, and so I started to continue writing, fleshing out the story as the scenes popped up in my head. With Legacy, nothing came in chronologial order (except the opening scene): the story came in jumbled pieces, and I wasn't really sure of how it all held together until the very end.

At that point, the book was a GIANT, as is normal for a first-time writer who hasn't learned how to contain a text, and a round with an editor shortened it somewhat (but it was still a GIANT). Thinking the book was all done and ready for publishing (haha), I started to send it to agents and publishing houses. Surrisingly enough, among both personal and standard rejections, I managed to attract the attention of some agents. The majority read the sample manuscript and pulled out, but one agent was quite excited and wanted to start a cooperation... IF I edited the manuscript and shortened it. By now, I'd realized the necessity myself, so I happily made the changes as requested, and resent the manuscript. By now, however, the agent wasn't so sure anymore. The market for historical is fickle at best, and she wasn't sure there was room for Legacy out there... and that was it. So there I was, with a slightly shorter manuscript but no agent.

I had to take a decision.

Going indie in those days (2015) wasn't as "accepted" as it is today, when it's a cool thing and something normal, but I felt that it had some advantages that I couldn't disregard. The freedom, for one. I wanted to do my own thing and make my decisions. From that point on, things just unfolded rather naturally. In October 2015, I'd made my own cover, tried to format the book as professionally as I could (which was rather amateurish, but I didn't know better back then)... and finally, I could launch it, which was a GREAT feeling.

Today, the book is quite different from the original version. The cover image is another (this changed in 2016, when the rights for the original image had run out), it's shorter, sleeker and (in my opinion) much better, and the formatting is new since last year (and SO beautiful). This is a book I'm proud of, and I hope you will love it as much as I do.

Bonus information: the sequel will feature some of the scenes that were removed from the original

Very good book. I could picture being there in the story.

I truly enjoyed this book . It captivated my interest so much that I couldn't put it down

It had a heroine you felt for and characters you got attached to. It was a good story with highs and lows.

This is a story that will bring you into a world of extreme splendour and strong feelings, as well as the everyday lives in the beginning of the 19th century. The book follows Emily from very unfortunate beginnings to being offered a chance to actually become happy in a life that is not always fair. The story flows like a stream, sometimes gently sometimes with force and, just as a stream, it is never stagnant. Simply wonderful and do you want a page turner? Here it is!

Curious? Wanna read? Download the first installment FOR FREE at Smashwords or B&N (unfortunately, I can't offer this at Amazon, because they don't allow me setting the price to free)